Late last fall I took a stab at a Belgian Tripel.  I’ve been brewing for ten years but had never made one and at the request of a friend decided to go for it.  I wanted to give it plenty of time to “funk up” so I let it sit in secondary until June.  When I kegged it I noticed that it seemed darker than it had originally.  I thought that was strange. 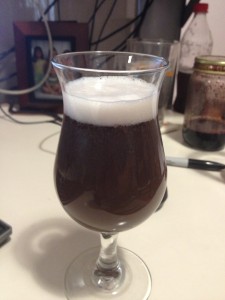 It’s a little less pronounced in the picture but the beer has a noticeably purple tinge to it.  It’s especially noticeable in the head.

It’s purple.  Why is it purple?  I’ve never made a purple beer before.  I don’t know how I’d make another.

If you were blindfolded and tried some you’d think that you were drinking a delicious Belgian beer.  It has no hop aroma, is a little spicey, and has a beautiful banana taste to it.

I’ve passed some around to some other homebrewers and the only thing they’ve been able to come up with is that the color change is the result of iodophor sanitizer coming in contact with unconverted starches.  I see two problems with this.

The beer is purple.  It tastes great and has given me a fun story to tell though, so I’ll take it.

What unexpected turns have your beers taken over the years?  Were they pleasant surprises? 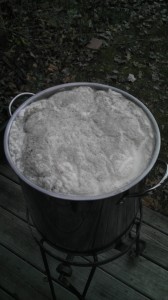