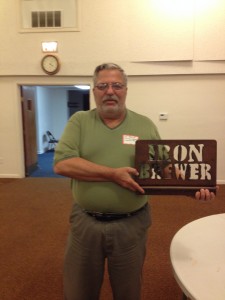 Here’s the recipe for 5 Gallons:

We fermented this with White Labs WLP530 Abbey Ale yeast.  After four weeks it was still fermenting but we had to get it kegged so we could get a couple of growlers to Grand Ledge.  It definitely tasted a little young and only fermented down to 1.029.  In truth, a tripel was probably a poor choice given the one month time frame from brew day to tasting.  Also, I don’t believe that we added any yeast nutrient to it.  That may have helped out some.

I’m also not sure about the fermentability of Jolly Ranchers.  This might be the subject of an upcoming experiment.

All analysis aside, we won so I guess it was good enough.

We have another five gallons of this beer sitting in a carboy.  We’re going to let it ferment to completion.  We’ve even tossed around the idea of souring it.

Thanks again to The Red Salamander and the Red Ledge Brewers for hosting this competition and allowing us to take part.  It was a blast and we plan on being there again next year.

If you make this beer or have ever tried fermenting Jolly Ranchers be sure and let me know.