Like most homebrewers that use propane, I brew outside.  As the days get colder and shorter this gets less comfortable.  November 9, 2013 was a pleasant exception to this.  It was cloudy and breezy but was in the 50s so it was a perfect day to set up some chairs in a garage in Byron Center and make some beer. 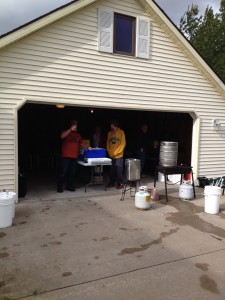 I had decided earlier in the week that I wanted to brew my Black Pumpkin Ale.  This is a beer that I try to make once or twice every fall.  You start out by roasting two bowling ball sized pie pumpkins.  I describe how to prepare them in my article Pumpkin Preparation for a Pumpkin Ale.

Here is the rest of the recipe for a five gallon batch:

I like to mash this beer hot to get lots of body.
Mash Temp: 157F 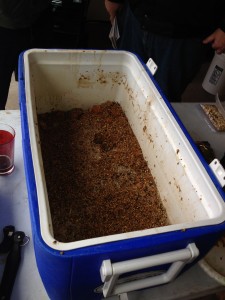 Pitch 1 Package of Safale 05
Ferment and then age in secondary with two whole vanilla beans for at least a couple of weeks.

With my equipment the original gravity usually ends up around 1.065 plus or minus a point or two and finishes around 1.015.

What I really love about this beer is that the spices are present, but they aren’t over done.  Also as the beer warms, each sip tastes and smells a little different.  A friend of mine described it as a “Journey in a Glass.”  It’s a favorite of both beer drinkers and non-beer drinkers alike.

This ended up being a pretty typical brew day.  The one item of note is that I had my first stuck sparge in seven years of all grain brewing.  This was because I left a piece of my manifold at home (actually I may have left it in a pile of grain in Grand Ledge) and it was apparently more necessary than I’d hoped.

I hope to get this beer racked to secondary this week and kegged by the middle of December sometime. 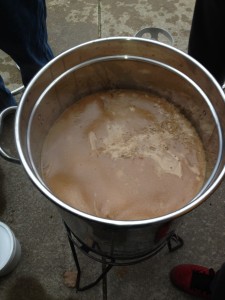 Next up is our annual Black Friday brew day.