I started watching Episode 29 of the BeerSmith Podcast the other day.  It’s an episode about Beer Brewing Myths.  In the interview, Denny Conn makes the comment, “It’s a hobby….If it isn’t fun, what’s the point?” 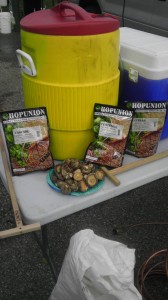 As I’ve mentioned before, I brew with Two Guys Brewing in Grand Rapids, MI.  There are more than two guys now, but the name stuck.  The club motto is, “It’s just beer.”  I think it’s important to remember that.

Look through brewing forums on line and you’ll see countless posts asking about brewing problems.  Many are simply diagnostic.  That’s great.  It’s wonderful that we have resources like the Internet and homebrew clubs to help us improve our brewing.  I’ve seen more than a few examples though, of people despairing over missing their mash temp by a couple of degrees or missing their original gravity by a few points.  Maybe a hop addition got left out.

I see at least two problems with this.

So remember.  It’s just beer.  If you mess it up, no one is going to die.  Worst case you’re out a little bit of cash.  If you have an issue, learn from it.  In all probability the beer will turn out fine.  It may not be exactly what you were shooting for.  Maybe it will be better. 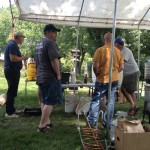 Ten years ago I started out doing partial wort boils making extract batches on the glass top electric stove in our kitchen.  I brewed my first batch using mostly donated equipment and ingredients along with an IRC transcript from my friend Chris explaining what I should do.  I had bought a copy of the Complete Joy of Home Brewing but hadn’t read it yet. 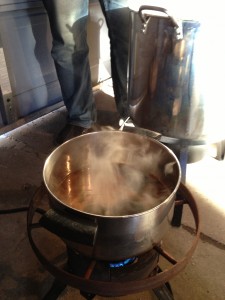 I had no clue what I was doing and it definitely was the worst beer I’ve ever made.  It was infected big time.  That’s okay.  We all need to start somewhere.

It got better.  There are many things that have improved my brewing.  These six stick out in my mind as game changers.

More space is better.  Full wort boils are simpler and lead to better hop extraction due to the lower gravity of the wort at boil time.  A full wort boil should also result in less caramelization in your boil kettle resulting in beers that are probably closer to what you are trying to make.  A huge advantage to a bigger boil kettle is that it allows you to boil harder while being less concerned with boiling over.

Once you are doing full wort boils you’ll realize that cooling off five gallons of 200+ degree liquid takes a long time.  This is pretty annoying.  And while much of life on Earth is grateful that water has a high specific heat, the homebrewer who finishes boiling at 11:30 PM on a week night really doesn’t care whether or not that fish at the bottom of the pond freezes to death in the winter or not.  I’ve tried water baths and I’ve stuck my pot in snow banks but nothing really worked well until I made an immersion chiller.  Not only is chilling your wort to pitching temperature in minutes rather than hours a huge time saver but it also improves the quality of the end product.  First, rapid chilling reduces the chances of an infection.  It also causes cold break proteins to drop out of the wort permanently resulting in a clearer beer.

It takes a long time to bring five plus gallons to a boil on your kitchen stove.  Oh, does it take a long time.  A propane burner from a turkey fryer kit or from the homebrew store is worth every penny.  I recommend using one with a 10 PSI regulator.  I used to use a five and it worked but it had a hard time keeping a boil going on a cold and windy day.   If you’re going to switch things up and try some ten gallon or larger batches this is an absolute necessity.

Your local homebrew store is a phenomenal resource.  It’s not just a place to buy equipment and ingredients.  Typically many of the employees are experienced homebrewers.  And if there’s one thing that brewers like to talk about at length, it’s beer and brewing.  They will help you build recipes, give you tips on techniques and most will taste your beer and give you feedback on it.  Homebrew stores often put on educational events and contests as well.  Get plugged in.  To help find a store near you, White Labs has a homebrew store locator on their website.  Google is your friend as well. 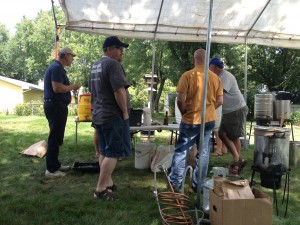 One of the best things I ever did was start brewing with friends.  I brew primarily with folks from Two Guys Brewing in the Grand Rapids, MI area.  We try and get together at someone’s house every month or two all year round.  We brew.  We eat.  We taste each others previous beers.  Not only is it a fun social event but it gives beginning brewers the opportunity to learn from the veterans and use equipment that they may not have yet.  Usually the veterans also learn a thing or two.  We’ve got a following of non-brewers as well.  We’ve managed to convert a few of them into giving brewing a shot.

What things have made big changes in the way that you brew?

Anyone who has been brewing for any length of time has heard that nothing can wreck your beer faster than poor sanitation.  In order for chemical sanitizers to work however, your equipment needs to be clean.  Star San or BTF work great, but if they can’t make contact with the surface you are trying to sanitize they are mostly useless.

We’ve spent the last several months living with my wife’s family while trying to sell our house.  Consequently I’ve had to change up the way I do a few things in the brewing department. I’ve been storing my equipment in a full bath in the basement.  There isn’t a big sink down there so I had to adapt and use the bath tub instead.  It’s worked well.  Not only is it more roomy than the kitchen sink that I am used to using at our house I’ve also found that I can get things cleaned up much more quickly.

I use two buckets and the bath tub.

Cleaning in the Bath Tub

One bucket gets put in the tub and is filled with cleaner.  I’ve been using dish soap from Seventh Generation for many years.  I know that some people don’t care for using dish soap on brewing equipment but this stuff rinses crazy clean.  It doesn’t contain any petroleum and I’ve never had any issues with residue or head retention.

I use the bath tub faucet for rinsing after I wash smaller items in the bucket.  It’s also easy to fill mash tuns, pots, and buckets scrub them right in the tub as well.

The second bucket sits outside the tub and gets filled with a Star San.  Once items are rinsed they go straight into that bucket and are good to go.

After I’m done with a transfer it’s very easy to give things a rinse in the tub, put them in the bucket of soapy water and start the process again.

The addition of a spray hose and a fitting to connect my bottle washer to would make things even better.  At this point however, the over-sized wash basin at floor level has been a vast improvement over using the kitchen sink.

Our house failed to sell so we’re back home now.  I’m working on redesigning the basement a bit to better accommodate my brewing equipment.  I want to take what I learned over the Summer and make a more ideal cleaning station.  That should at least get me out of the kitchen.

How have you had to adapt your brewing practices?